A very special «Thank you» to Charlene Morrison for the support she gave us for Louis.

Dear Charlene, it has been a while since I wanted to give you a special picture of Louis. But the popularity of this album «Un don une photo» («A donation, a picture») kept me busier than I thought… And, with all Louis’ care and medical appointment and my getting back to word, it wasn’t long before I got late with pictures’publications !!

It was important to me, though, to tell you how much your donation ment to me. We haven’t seen each other for so many years but still, you decided to help me with my son even if you never met him.  I hope you can meet him some day. With his health condition, we had to report the trip we wanted to make to PEI but as soon as Louis’health is stabilized, I really hope we can make it to visit you, Shani and the rest of the family.

I often think of my stay in Charlottetown. You welcomed me so generously in you home, treated me just like your daughter, introduced me to your family. You helped me a lot with all this new life, this new langage and culture I had to discover in only three months… Did you know that I still cook that (Oh soooo delicious) pumpkin cheesecake! It is very popular, thank’s to you 😉 And Oh that day when I got sick (and more homesick also) and you bought me vanilla an chocolat-almond ice Cream… And all those diner with you family, and those everyday conversation and laughter. These are some of the memories I cherish from my stay in your family, in PEI.

So just for you, a picture of my little pumpkin man, looking so old already. He is seeting in a special chair helping him to stand straight keeping his head up. He can also touch and play with toys that we put in front of him. In this picture, he is very concentrated trying to look at me correctly with both eyes ( while I encourage him : «Regarde maman, Louis, regarde maman!») He is slowly getting better at this…

And yes, Louis has red hair! Isn’t it funny 😉 He must have a little bit of PEI in him 😉

Hoping to see you soon

(I hope my english is not so bad and you can still undeerstand me!! ) 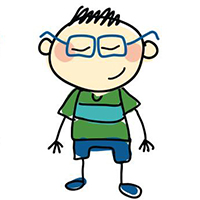